It was Friday at 10:30 AM, and I was teaching ionic bonding to my 2nd block chemistry class. It was the day of our first home football game on a brand new turf field, and everyone was excited. The students were learning how to write chemical formulas for substances like magnesium sulfate, copper II oxide, and of course, sodium chloride.  My 2nd block class is an interactive group. They talk to each other, they talk to me, and we have open, ongoing conversations about chemistry or whatever is on their minds. It’s a little rowdy sometimes, and when I ask them to stop talking so loudly, I often realize that they are collaborating on their work and simply having fun being together.

As I was writing on the board, I showed my kids how the number of positive metallic charges must be equal to the negative charges of the nonmetals. I drew two sodium ions and one sulfate ion to show how the 2 to 1 ratio made logical sense. After finishing a sentence, but just as I started to show a new example, one of my students called out for everyone to hear: “Thank you Mrs. Milam for supporting us with your Nikes!” Surprised by this twist of the conversation, I looked down to see what I was wearing. I scanned over my purple & gold ECHS Indians t-shirt and my blue jeans. I was not wearing Nike. But then, I saw it…the white Swoosh on my black Nike shoes. I felt smug, realizing I had chosen to make a statement with my shoes. Then another part of my brain kicked in and reminded me that it was just a lucky coincidence that my comfortable Friday shoes happened to be Nikes.

I responded to my student by looking at her and simply saying, “You’re welcome.” The lesson continued, and the class figured out how monatomic and polyatomic ions bond together to form chemical compounds.

In our classroom, we use whiteboards to work problems and draw particle diagrams. On this Friday, each student had a board and a marker and was ready to follow my example. I was showing them exactly what comprises a unit of potassium phosphate, K3PO4. As I drew three potassium ions (K+, K+, K+) and circled each one of them, I saw with disbelief what I was writing on the board. I was creating a visual which would potentially elicit terrible images and high emotions. I quickly drew the single PO43- ion and circled it, making the decision to quickly finish this awful example and move on to a new one. Most of the students were just watching the chemistry unfold, but I heard a few distinct voices mumbling about the three K’s. They all continued following the chemistry, however, and nobody made a big deal about it, much to my relief. One thing I love about chemistry is that it’s challenging enough to keep teenagers engaged and focused.

My class still needs more practice, but the students grasped the lesson. Was it because I was wearing Nikes? I don’t know. Would it have caused problems if I had announced a ban on Nike? Maybe so, but who’s to say for sure? Unlike chemistry, issues like these are not always logical, and they don’t have clear-cut answers. They are not as black and white as those shoes I was wearing.

The potassium phosphate example was a terrible faux pas. Actually, it was much deeper than a faux pas. It created an image that had the potential to create hate and resentment among the people within my classroom. Of course, the image was based on a harmless chemical example. It was an innocent compound that manifested into an ugly diagram because of some horrible choices made by people in our American history, people who probably believed they were making America a better place for their own children by destroying the rights and liberties of other children.

The day before I wore those shoes to school, I watched the new Nike commercial that spotlights  impressive athletes in action and is narrated by Colin Kaepernick. It’s a powerful commercial. Nike has found a way to shed positive light on an issue that has become polarizing and messy. Nike has found a way to create bonds among those people who want America to become a better and safer place to live. Nike took the risky initiative to broaden our perspective. They captured the essence of what it means to create change through action. Taking social action alienates those who are not ready for change. It often makes people angry. Taking social action may require breaking tradition and violating etiquette, but in doing so, it initiates progress. Progress is more important than tradition. Progress is more important than etiquette. Progress instigates anger, which is always rooted in fear. Didn’t we learn in school that one of our most beloved Presidents was shot and murdered because of his mission to make America a safer, more liberated nation for all people? Think about it. Has there ever been a significant historical change that doesn’t make people angry?

Just like chemistry challenges us intellectually, Nike has challenged us socially. As much as we value education and scientific progress, these are meaningless endeavors if they don’t accompany the advancement of human rights. Nike asks us: What are you striving to achieve? What are you doing to improve your performance? More importantly, though, what are YOU doing to create liberty and justice for ALL? 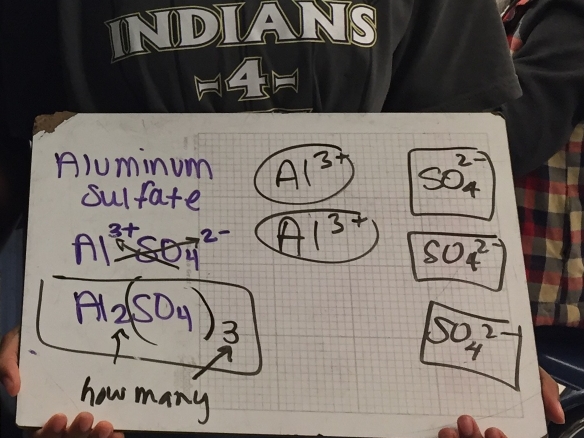